Two definitions of the word ‘standard’:

Indeed, our Father the King has set new standards for us by having the Son call us out of the world as He was revealed to us through the power of the Holy Spirit.

They are His standards for entering into His Kingdom. While they seem intolerably high to us, for G-d, they are normal for fellowship with the Israelites in the Old Testament. As He said to Isaiah, (55:8-10):

In the New Testament, we as Gentile vines have been grafted into Israel’s tree of life through Jesus. Let us be reminded they were a people G-d had to keep pruning in order for them to claim the Kingdom of Heaven through the promised Messiah, but when G-d delivered the Promise, just as their fathers did with the land G-d said He’d already given them, they did not believe.

Consequently, the land was taken back from them, and when they relented and tried to get G-d back on their side at their convenience, He took His hand from them, and they were defeated.

In the same fashion, Jesus warns those of Israel who don’t believe that they won’t see the kingdom either. (Matthew 21:31)

To be grafted in under the covenant of grace should then give us great comfort in being assured of the life and age to come. As we have been grafted, so too, must we be trained to form. We are different, yes, but we are all equal and loved in the sight of G-d, as we follow Christ.

Think of it this way: like the grafted branch you were selected, removed, and placed in better circumstances (though it may not seem that way at the moment).

When Jesus tells the disciples He is the Vine and they are the branches, they are admonished in their flesh to stay close to Him, as they depended on Him to impart to them the power to work miracles through faith and the Holy Spirit. In no uncertain terms does He remind them that apart from Him, they can do nothing. (John 15:5)

So today, believers, let us examine ourselves, knowing we’ve been grafted, and are in training, to receive the standard of divine reclamation through Christ’s redemptive work on Calvary, abiding in the power of the Vine.

Are we attracting the pleased attention of our King?

Let us be ever mindful to work to achieve His standards, knowing that as long as His mercy and grace preside over our time, they are given to us that we will not die in our sins.

Let us also be reminded, however, that all things end in tested works and judged lives, irrevocably. He will bring those who’ve met the standards of His sovereign will into His rest, and purge the rest from His sight and kingdom to the consequences of their unbelief for eternity, despite their cries for mercy and grace.

Father in Heaven, as the Earth and everything in it is yours, you are sovereign in deciding who is part of the Kingdom, and what they will do as their service, to Your glory, the highest and best of all standards.

Bind our wandering souls with the power of Your Holy Spirit to Your Branch of Jesse, lest we fall in our own arrogance to die in our sins.

Forgive us, this day, our sins and rebellion, both in the past and in the days to come.

Today, help us to raise the standards of our meager service to yours, reminding us that blessings and cursing should not come from the same source. Convict us as the seed of disobedience seeks to germinate and graft us to a withering vine destined for burning. Find none in us not covered by Your blood, for sin can have no place in our salvation, as You possess none.

May Your words be sealed to our spirits, now and forever. 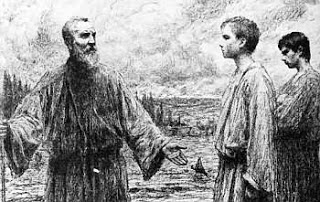 The Parable of the Two Sons

They said to Him, “The first.”

We live as servants to the Lord in our life’s purpose. Once chosen, called, redeemed, and reconciled to the Father in spite of our many sins and wayward walks, our Lord commands us to tell others so they may also come to repentance, seeing the goodness of G-d in the land of the living. (Psalm 27:13)

Jesus admonishes us to be about the work, not about the intentions to work; there is such a thing as too much counsel. There are also those who feel a sense of superiority in the fact that they’ve been chosen, and allow pride to ruin and otherwise sidetrack them from the simple, yet most difficult of commands: Love one another.

Harlots and tax collectors were considered to be the worst kinds of sinners, separated from G-d by their sin, and then John the Baptist came preaching with zeal and passion, telling them that G-d still loved them, and wanted them, but they had to stop what they were doing and come to Him in spirit and truth. Abandoned by the chosen ones whose hands were available to help, but only threw more spiritual stones of condemnation at them, their hearts and spirits responded to the message.

Jesus told them in this parable that if the worst of sinners could respond to the Gospel, what was it in the hearts of the chosen that kept them back when they saw what was happening?

Certainly Paul, the most cynical and prickly of the Apostles, who didn’t even walk with Christ, and persecuted the church, as he says, ‘with zeal,’ knows what he’s saying when he tells us that ‘knowledge puffs up.’ (1 Corinthians 8:1)

In contrast, John, the disciple Jesus loved, tells us that we cannot claim to love G-d whom we haven’t seen, if we hate our brothers and sisters we see all the time. (1 John 4:20)

Jesus Himself tells us that if we are to be with Him in the Father’s presence, we must do the Father’s will. (Matthew 12:50).

Let us reflect today on which of the two sons we truly follow: the one who repents and obeys, or the one who speaks willingness, and leaves his work undone. If we are not among those we deem the worst of sinners, and they’re getting in ahead of us because they receive the message of forgiveness, repentance, and obedience, we will have our answer.

There are days I feel energized, excited, and fully capable to perform all that the Father asks of me. I am a beacon of light in those times: enthusiastic, excited, happy, and even patient and understanding with those who resist me, forgiving those who stand against me, and in those mountaintop experiences, I praise You with a song of ascent.

My faith feels firm, sealed to my spirit as I go about doing the work I was called to in Your Name, to the Father’s glory, and for awhile I really do believe all things are possible.

There are other days, Lord Jesus, when I feel like the Father should be grateful I’m even speaking to Him. Something or someone has battered my spiritual armor, and got past my guard. They spoke a word, or did a deed, or both, that shook me, angered me, and made me want to call down the Father’s holy fire in such a manner that they would never think to do so again.

You tell me in those moments that I don’t know the type of spirit I’m letting in (Luke 9:55). I get sullen, and prideful, and don’t ask forgiveness. I wonder if the Gospel is nothing but a cosmic hoax sent not by the King and Creator, but merely a divine jester and puppet master. I attribute the behavior of wicked men to a holy G-d, and walk in foolish fearlessness of Him who is able to cast my soul and body into eternal fire, and to wipe it out in an instant.

Today then, I stop, and give heed to the voice of my Father, and ask His forgiveness once again. I regret my rebellion, and remind myself that when I walk in His will, all that He has is mine, and as I fulfill my calling to bring glory and honor to His Name, He will sustain and protect me in all that I do. And I am reminded that Satan has no power over me, save that which in my flesh, I give him, as Adam gave him dominion once he disobeyed the will of his Father by not obeying His command.

Today then, let me be the repentant one who quietly goes and does their Father’s will, that I might be reconciled to Him once more through Christ, who bore my punishment and the Father’s wrath, that I might come to know His eternal love for me when I dwell in His presence forever, praising as I serve.

May Your Word be sealed to my spirit, now and forever.