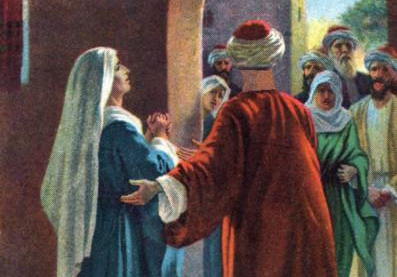 15 And Simon Peter followed Jesus, and so did another disciple. Now that disciple was known to the high priest, and went with Jesus into the courtyard of the high priest. 16 But Peter stood at the door outside. Then the other disciple, who was known to the high prbiest, went out and spoke to her who kept the door, and brought Peter in. 17 Then the servant girl who kept the door said to Peter, “You are not also one of this Man’s disciples, are you?”

18 Now the servants and officers who had made a fire of coals stood there, for it was cold, and they warmed themselves. And Peter stood with them and warmed himself.

36 At Joppa there was a certain disciple named Tabitha, which is translated Dorcas. This woman was full of good works and charitable deeds which she did. 37 But it happened in those days that she became sick and died. When they had washed her, they laid her in an upper room. 38 And since Lydda was near Joppa, and the disciples had heard that Peter was there, they sent two men to him, imploring him not to delay in coming to them. 39 Then Peter arose and went with them. When he had come, they brought him to the upper room. And all the widows stood by him weeping, showing the tunics and garments which Dorcas had made while she was with them. 40 But Peter put them all out, and knelt down and prayed. And turning to the body he said, “Tabitha, arise.” And she opened her eyes, and when she saw Peter she sat up. 41 Then he gave her his hand and lifted her up; and when he had called the saints and widows, he presented her alive. 42 And it became known throughout all Joppa, and many believed on the Lord. 43 So it was that he stayed many days in Joppa with Simon, a tanner.

What a roller coaster of a disciple! He cursed when he promised the Lord he would die by his side, then he was found warming himself with the servants on a cold night as a sham of a trial went on for Jesus.

Later we see him boldly working a miracle on Dorcas in much the same way that Jesus put out the mourners and scoffers. Here Peter does the same as Christ did with the little girl whose parents were grieving, putting out the mourners who were showing him things she’d made for them.

There can be no distractions now, no scoffers. No deniers of those who say it’s impossible. No one who puts heavenly matters into earthly things.

For a time, Peter enjoyed the simple heat of a worldly fire, safe in deceit for the moment, denying who he was in Christ as Jesus was undergoing unholy humiliation, beginning the process of taking on our sins.

When Peter raises Dorcas from death, through faith in Christ and by the power of the Holy Spirit, he is in full glory as the restored Apostle, the one who walked on water to his Lord’s side until He grew afraid and looked at his circumstances in the world, needing to know in that brief moment how Jesus must have felt being able to do it Himself.

When he raises Dorcas, he becomes the spiritual rock to whom Jesus gives the keys to Heaven, and the power to bind or loose, because the power flowing through him continued to circle back to glorify the Father.

If we have lived any length of time, there are dead things in the upper rooms of our days: dreams, plans, hopes that we tried to make fit but were not our calling, or were laid aside because we no longer sacrificed to achieve them.

Some we buried in silence and shame. Others because those who said they believed in us and would be with us no matter what, fled when the time came and betrayed us denying us and breaking their vow.

But there is a G-d in Heaven, and His Word does not return to Him void. What He has spoken, sang, and rejoiced over in you He will bring to fruition.

In these times, like Peter, let us bring a strong, bold, faith-filled witness that cuts to the heart. Let us stand in our rightful place to teach, speak boldly, and count the persecution as part of the cost when Jesus tells us the world can’t hate us because it hated Him first, testifying that its’ works are evil. (John 7:7)

Are we, as believers, ready to stand up in the midst of the assembly, and be voices crying in the wilderness? May He count us among the worthy.

Your servants, on their best days, are weary, scared, and doubtful as the enemy grows increasingly loud and busy, as the world is becoming all You prophesied.

Help us to keep our eyes focused on You as our treasure, then our hearts will be there also. Help us not to look at the circumstances surrounding us, so that our hearts don’t grow faint and we fall, submerging ourselves in sin, and sighing in our spirits as we go back to the life we used to live before placing our faith in You.

Give us wisdom to discern the meanings of the times we’re in, and know what to do.

Be with us in the midst as we pray to You in one accord for our nation, our leaders, our fellow citizens, and our purposes to make You, Father, the center of all things once more.

And if we are still stiff-necked enough not to repent and receive a bounteous healing, we ask that You put aside all scoffers and raise us from the dead, alive in You, and grateful for it as we glorify G-d, now and forever.

In righteousness, peace, and joy may we honor You.